Well, it took awhile to happen — understandably so.

Saturday rained all day, so not much happened in the F4 Field.

Next race is August 21-22 at Calabogie Motorsports Park.

Some members of F4 Canada will be entering the FS class at Waterford Hills on Labour Day weekend, as part of the Great Lakes Championship Series for FC/CFC cars.  Check it out. 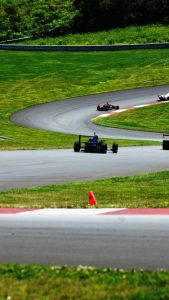 Some photos of the opening weekend.  Thanks to Richard Coburn for the majority of these pics! 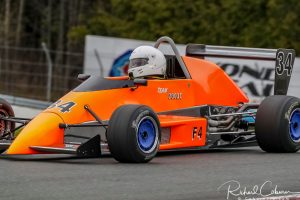 Round 1 of the 2019 F4 Canada schedule is in the books.  It was a chilly and damp opening weekend at Canadian Tire Motorsports Park.  We had a small entry for the season opening, but most importantly, every car went home in one piece.

Saturday morning’s practice session was red flagged on the out lap, as an Italian F4 spun on the pit exit, blocking it, and trapping many of the Formula Libre cars in the pits.  This was actually good news for the #11 Gamma F4 of J. Morton, who had a Zeus Fastener malfunction, and lost his rear bodywork in turn 2.  A quick check of the car in the pits ensured the rest of the bodywork was okay, and when the session resume, he was able to set some laps.

During the qualifying session, troubles continue for James Morton’s Gamma F4.  Out on a flyer, he felt a very unstable rear end, and limped back to the pits.  Driving up the pit lane, the crew noticed the Left Rear wheel was drastically askew, and quickly signaled him to shut down the car.  Upon inspection, the lower radius arm had come unfastened from the hub, resulting in bending the upper radius arm and the push-rod.  The crew pushed the car back to the paddock in order to attempt repairs in time for the afternoon race.  Before his incident, however, Morton still managed to set the fastest lap to qualify P1 for F4, followed by # 34 R. Long in P2, and # 55 M. MacNeil in P3.

Morton and crew managed to get the parts replace and the car back together in the for race 1 Saturday afternoon.   For Saturday’s race, FL (formula libre), Radical Cup, and F4 race in the same group.  On the Green Flag, Morton’s #11 had a typical great start, passing many of the Radical Cup cars going into turn 1.  Unfortunately, #34 Rober Long’s Gamma F4 had a vastly different experience.  He developed a rather obvious misfire on the pace lap, backfired down the front straight on the start moving to the back of the field, and retired at the end of the first lap.  A very untypical race for the meticulously prepared race car of Mr. Long, who is know for his car’s reliability, and high percentage finishing rate.  At the end, #11 Morton won the season opening F4 race, with a best lap time of 1:23.290, finishing 6th overall behind one V6 Radical, and 5 1500cc Radicals.  #55 MacNeil finsihed 2nd in the F4 class.

Saturday night, and early Sunday morning rain, made for a damp and cool track Sunday morning. For Sunday’s races, the Radicals had enough car entries to have their own race group, leaving just the FLs & F4s together.  #11 Morton started outside pole overall beside the new Ford GT powered Radical.  Robert Long’s #34 F4 seemed to have the fuel-injection issue solved in time to start the race from the back of the grid, while #55 MacNeil was to started 2nd in class, 4th overall.  Once again, #11 had a lightening start, taking the lead into turn 1.  #31 Matt Graham in the exotic Radical managed to take the lead back going up the back straight, not to be seen nor heard from again, dropping into the 1:17s.  Morton ran an uneventful race to take 2nd overall in FL, 1st in F4, with a fastest lap of 1:24.517.  #34 Long finished 2nd in F4, followed by #55 of MacNeil.  All drivers spoke of the track being slick, and the lack of grip compared to the previous day.

The rains started shortly after the race, and kept raining off and on for the rest of the day.  The temperature stayed single digit all day, so combined with the rain, and slick track, all the FLibre and F4 drivers decided not to go out for their second race Sunday.

Overall, a fun and successful season opener for F4 Canada the the Three-Quarter Litre Association.  Next event is June 29th & 30th at Shannonville Motorsports Park, as part of the CTCC (Canadian Touring Car Championship) event.

One final comment.  John Bondar and Corner2 racing, organizers of the CTCC are tryng to get a FIA F4 series started in Canada, calling it the F4 Cup Canada.  We wish Bondar & Corner2 success in promoting open wheel racing in Canada.

Link to the 2019 race schedule

The TQLA (Three-Quarter Litre Association / F4 Canada) Annual meeting will be held at the Idlewyld Inn on Saturday Dec 1st, 2018.
We will have a social gathering with coffee and snacks at 10:00 together with the collection of dues.
The meeting will convene at 10:30am.
This will include a review of 2018 and and a forecast for 2019, a discussion around a new name and a potential “B” class within F4.
Other topics will include news from the CASC Race Workshop and Annual meeting, a financial report and a discussion of our web site as well as anything else raised from the floor.
The meeting will be followed by a communal lunch.

This error message is only visible to WordPress admins